HYPERGRAPHIA - the compulsion to write in bipolar disorder 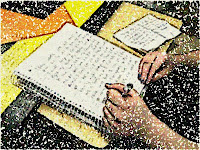 It was not easy finding a 'reputable' definition of hypergraphia so I will accept the one from About.com as it is comprehensive and consistent with other definitions found in various more reputable sources.


A Definition
About.com definition (not the most scientific of sources):
Hypergraphia is a condition in which a person feels an overwhelming compulsion to write. People with bipolar disorder, especially during mania or hypomania, may find themselves writing for hours at a time, not necessarily realizing that this is unusual. It may take the form of journalling, creative writing, or copying page after page of a book. Hypergraphia may also be associated with temporal lobe epilepsy and schizophrenia, as well as certain brain injuries.


The Experience of Hypergraphia
I realized that my hypergraphia was associated with both  hypomanic and depressive episodes but in different ways. When I am hypomanic I get creative and write all sorts of things - poetry, magazine articles, blogs, academic articles, abstracts, and long emails to friends. I also find myself entering notes into my blackberry, when I dont have access to paper or a computer. When depressed, I write dark poetry but have no other creative productivity. When I am hypomanic I have no desire to write poetry. My brain is just not so inspired. So in my search to understand this pattern, I found some interesting information I wanted to share with you and I would love to hear your stories.


What the Scientists Dont Say
It was not easy to find information on this condition. It did not show up in a search on the Merriam Webster online dictionary. A search on the website of the National Institutes of Mental Health (NIMH) and the Mayo Clinic also resulted in no entries. No books could be found in my school library database but In the PsycInfo and Medline databases it is primarily associated with temporal lobe epilepsy.


However there are some well known experts in psychiatry and neurology who have been writing about the behavior from personal and scientific perspectives.


What Some Scientists Say
The Midnight Disease - is a book by Alice Flaherty,  a neurologist at Massachussetts General Hospital. She found herself writing compulsively both after the death of premature twin boys and the birth of healthy twin girls later diagnosed herself with hypergraphia. She believes that this behavior is attached to extreme moods that are found in people with manic depression and other people with brain disorders and brain injuries. 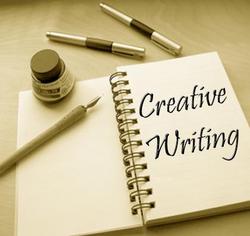 Peter Whybrow, MD, Director of the Semel Institute for Neuroscience and Human Behavior at the University of California in Los Angeles and a specialist in mood disorders, was reported in the The Guardian (March 17 2004) as saying that manic depressives with a predisposition to chronicling their lives or composing poetry are likely to engage in voluminous writing in their darkest hours.disorders.

Dr Kay Jamison, a professor of psychiatry at John Hopkins University, was quoted in The Guardian (March 17, 2004) as saying that "Two aspects of thinking are pronounced in both creative and hypomanic thought: fluency, rapidity and flexibility ... and the ability to combine ideas or categories of thought in order to form new and original connections."


Mood Disorders and Creativity
In a conference at the Library of Congress (Depression and Creativity, Feb 3, 2009 - click link for video), both Dr Jamison, Dr. Whybrow discussed the controversial and long-standing (pre-Grecian) conversation about creativity and mood disorders. The symposium also included Dr. Terence Ketter who is chief of the Bipolar Disorders Clinic at Stanford University, whose research focuses on the relationship between creativity and madness. Though most artists and creatives do not suffer from mental illnesses but many creatives, especially poets, suffer a disproportionately high rate of mental illnesses, particularly depression and bipolar disorder. Dr Jamison refers to Mendelssohn, Virginia Woolf, Van Gogh as creatives with mood disorders. She argues that during periods of depression people are less productive and are more productive when they are manic or hypomanic.


The Advantages and Disadvantages of Hypergraphia
The great thing about hypergraphia for an academic is the productivity. However it is frustrating that there are often so many ideas that cannot all come to fruition. It inspires insomnia. But the indulgence to these intense desire to write is that it compensates for depressive episodes where dark moods interfere with the discipline to complete ideas.

Manic depression has its advantages and disadvantages and though hypergraphia is both blessing and curse (depending on its expression), in a world where productivity is valued, I have no cause to resist its lure or try to medicate it away. There is beauty in seeing words that come from my brain. And one can only hope that others share the same view.

Note: This was written in a hypographic period during a hypomanic phase.
crazygirl at 1:26 AM
Share